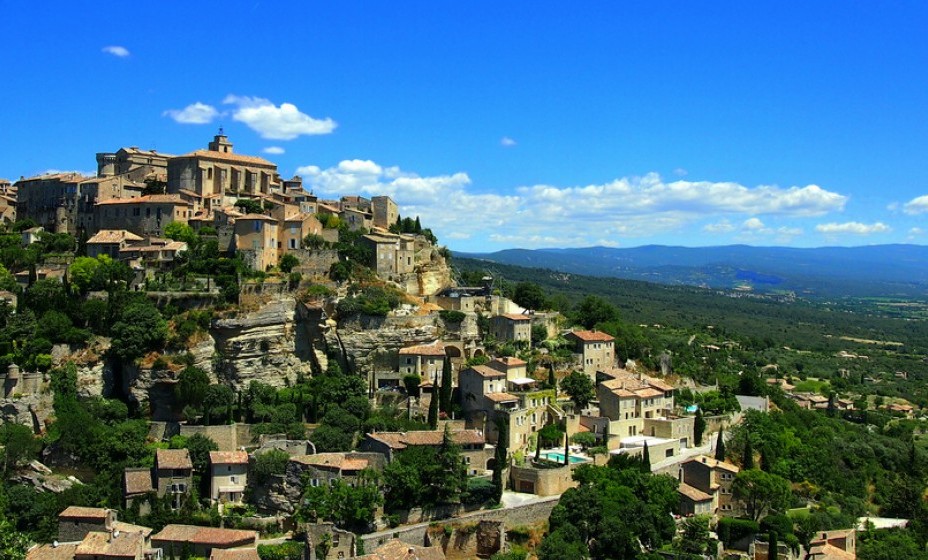 From Gordes to Roussillon, in the heart of Provence
Half-day

Gordes and Roussillon, along with Bonnieux, Ménerbes and Saignon, are the most beautiful of the Luberon hilltop villages where you enjoy life by walking down their narrow, cobblestone streets or by savoring a terrace lunch. Midway between the towns of L’Isle-sur-la-Sorgue and Apt, these medieval villages have contributed to the reputation of this Provence region in France and all over the world. On this gentle backcountry walk, your local hiking guide will lead you during a half-day trip from Gordes to Roussillon through landscapes made of rolling hills, vineyards, olive or truffle tree groves and pine woods. Walking at the foot of the Monts de Vaucluse, you will keep in sight on your right the range of the Luberon mountains on the horizon.

Ochre trail in Roussillon not included.

Nestled in the heart of Provence, the Luberon Regional Nature Park is a living and preserved countryside area that stretches over 75 km E-W on both sides of the Luberon mountains and over 2 départements : Vaucluse and Alpes de Haute Provence. It includes 77 municipalities and has a total population of about 180,000 inhabitants.

This rural territory is characterized by a mosaic of landscapes and of habitats, reflecting its geological history, climate and human activities.  The region is home to an exceptional biodiversity.

Not far from the picturesque Provence village of Gordes, your local hiking guide will lead you in the lowest section of the 5-mile canyon that the Veroncle river cut into the south-western bottom of the Monts de Vaucluse. What makes this short hike unique is that the cultural heritage is even more valuable than the one nature has left : you will see during your walk the remains of three of the ten watermills that were built between the 16th and 19th centuries. These old buildings are of a high quality in an area that is not easily accessible : dams, cutstone penstocks, retaining walls, large reservoirs and long canals carved out of the rock, and numerous millstones. A wild and beautiful spot. 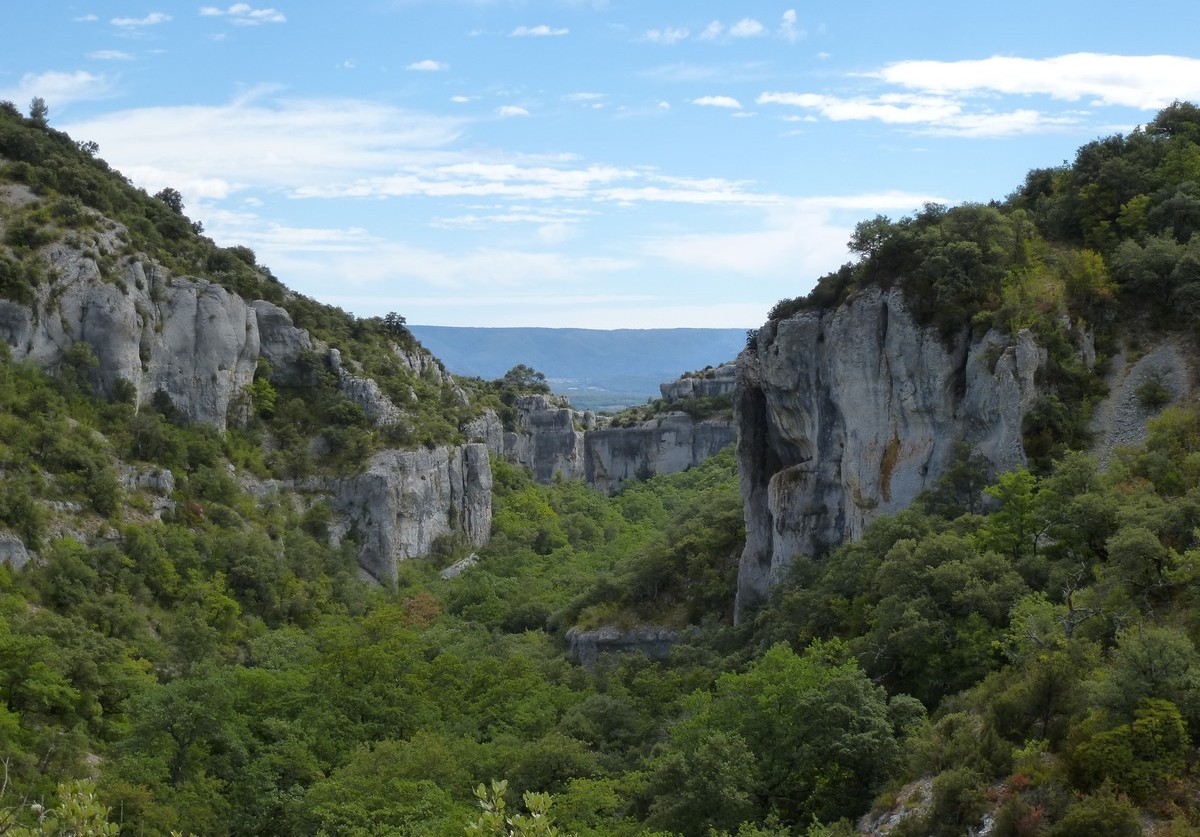 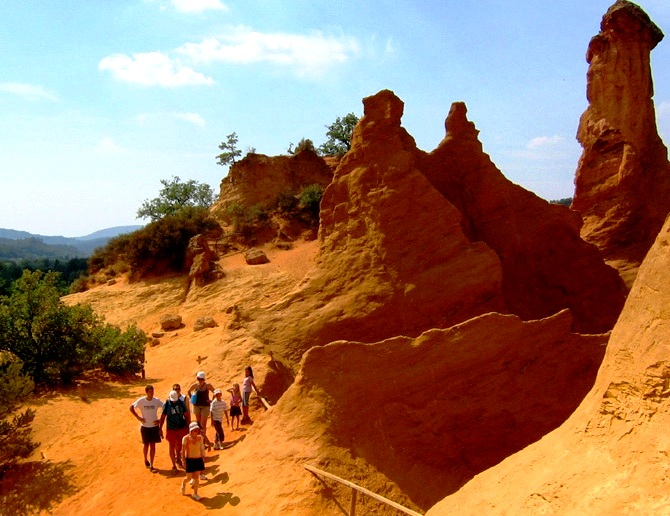 Among the former ochre quarries still visible to the north of the Luberon region, one of the most prodigious spot is called Colorado Provencal ; it shows fascinating landscapes, sculptured over the ages both by nature and man, in a palette of colors, varying from saffron yellow to blood red and including white sands as well. In addition to the breathtaking views you will get from the pathway, your guide will show you some of the last remains of the ochre industry and provide you with interesting facts about this economic activity that flourished in the region of the Luberon during the 19th and early 20th centuries.

Situated between Forcalquier and Apt, the village of Oppedette, a former Celtic-Ligurian oppidum, sits above spectacular gorges carved out by the Calavon torrent, small gorges that are among the most beautiful ones in Provence & Côte d’Azur. During this short trip, your local guide will first lead you to several beautiful points of view over the mini canyon before taking you down into it, allowing a real exploration.
Another loop route, about twice longer follows the edges of the cliffs on the western rim to the southern end of the canyon, where a country road bridge spans the stream.

If you are afraid of heights, you had better choose another hike.
Not recommended for children under 10. 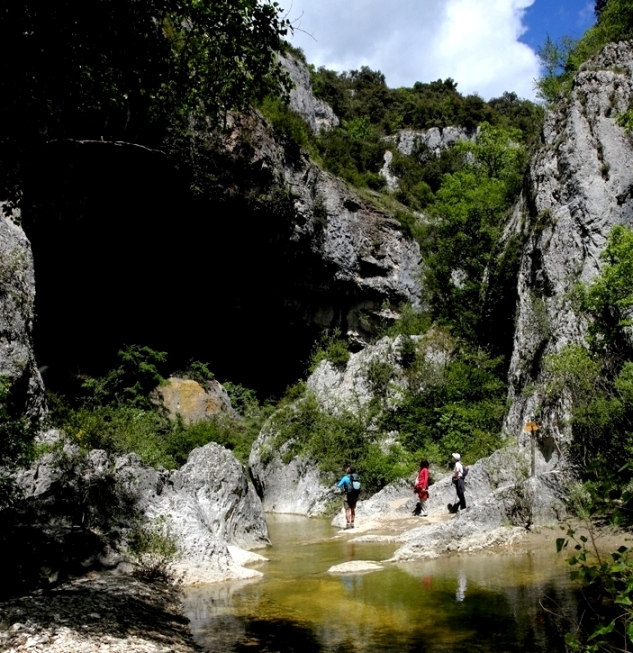 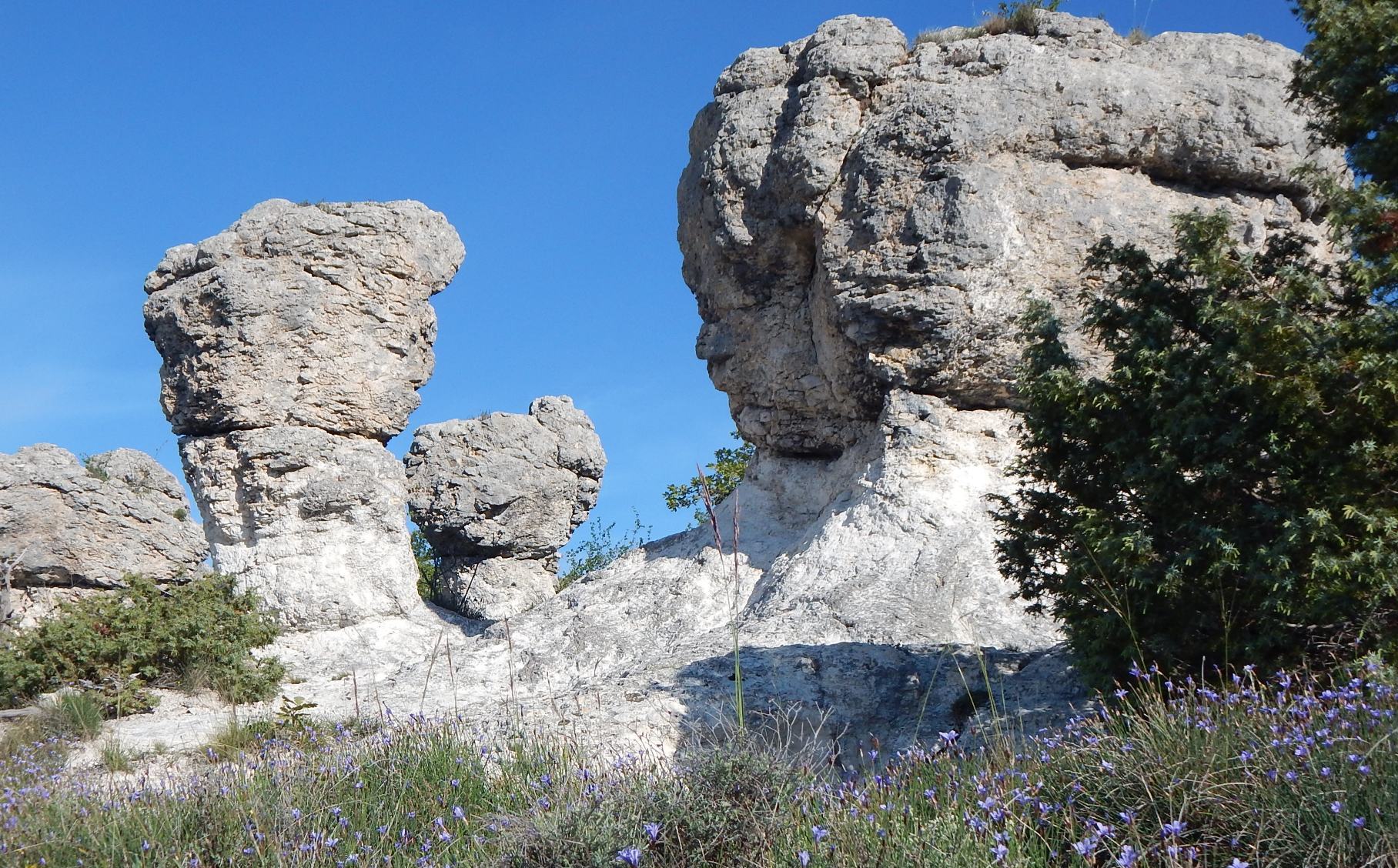 A singular walk among the intriguing Mourres rocks
Half-day

The Mourres rocks can be found to the north-east of the Luberon Park, next to the charming town of Forcalquier, known to have one of the most typical Provence markets. It is a fascinating site, where can be seen several hundreds of strangely shaped rocks : some look like giant mushrooms, others like big weird muzzles. As you climb up higher, you enjoy a beautiful view of the Alps on the horizon. And before the end of this circular walk, your local guide will allow you to enjoy discovering a few Cabanons Pointus, these picturesque traditional dry stone huts whose unique outline is specific to the Forcalquier area.

Walking time : 4.5 hours
Rating : moderate
Season calendar : year-round (summer : 8am – 11am only, on a shortened itinerary)

On a rocky spur high above the Aiguebrun gorge lie the impressive ruins of a medieval fortified village called Fort de Buoux (optional visit). Located in the heart of the Luberon mountains, this incredible site is a beautiful and peaceful place that the Neanderthal man chose to settle down, 50,000 years ago. It is a very special area due to the contrast between a cool and humid valley with lush vegetation and temperate climate plants, and a desolate plateau, covered with lavender fields and scrubby woods. Inside the 13th century castle, numerous medieval vestiges remain: defensive walls, watchtowers, dwellings, cisterns, grain stores and a church. And the hidden staircase is an alternative way down from the fort, but not for the faint hearted ! 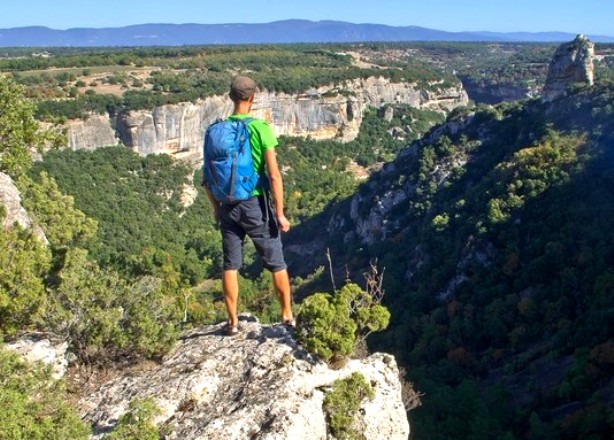 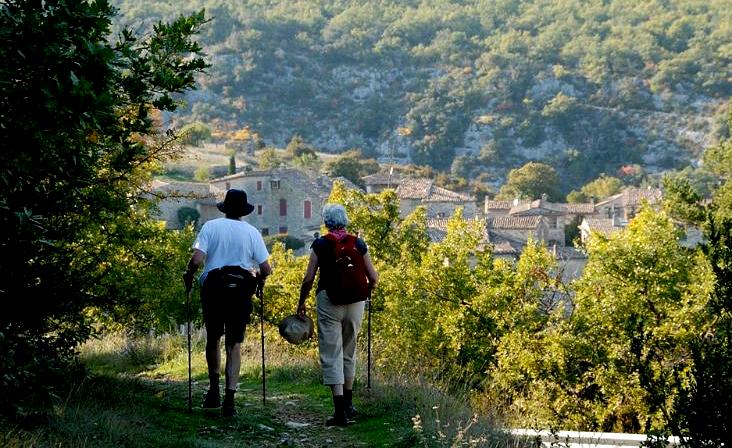 For centuries, these two medieval villages have been standing face to face, each one on its hill, at the foot of the Luberon mountains. From Lacoste, dominated by the imposing ruins of a castle which once belonged to the Marquis de Sade, you will walk on a backcountry trail between olive groves and truffle plantations, vineyards and lavender fields, enjoying the local color that set the charming ambiance of Peter Mayle‘s novels. On the long itinerary, your guide will lead you on the slopes of the Luberon up to the Cedar forest. On your way down, you will have a multitude of viewpoints over Bonnieux, and its very picturesque terraces. The panorama extends from Lacoste to Roussillon and Gordes, three of the most lovely perched villages, with Mont Ventoux visible in the background.

Walking time (including both villages visits) : 3.5 hours (short) /  5.5 hours (long)
Rating : from leisurely  to moderate
Season calendar : year-round (summer : 8am – 11am only, on the short itinerary).
Not allowed on fire risk days.

During this nature walk, you will see one of France’s most beautiful little towns, Gordes, located less than 25 miles east of Avignon. And you will be able to discover the amazing rural architecture of Gordes surroundings : dozens of huts and other ancient farm buildings, such as cisterns, vats, ovens, and sheep shelters, all built in dry stone. Another major attraction is the 12th century Cistercian Sénanque Abbey, hidden in the narrow  Sénancole valley at the foot of the Monts de Vaucluse, whose harmonious ensemble of buidings is considered as one of the purest examples of the cistercian architecture. 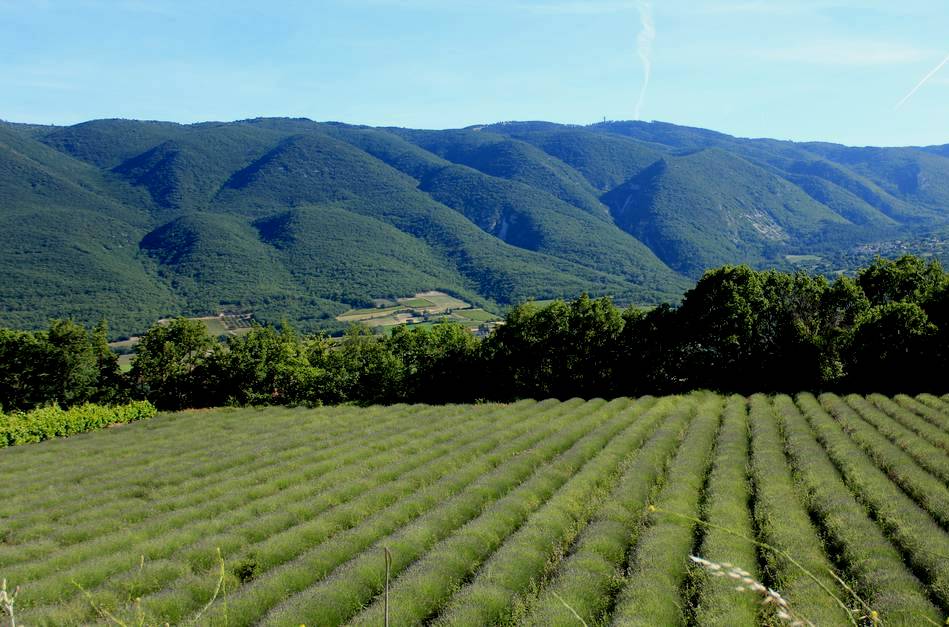 Walking up to the summit of the Luberon mountains
Full Day

On this itinerary starting from Castellet, a tiny village on the Luberon mountains northern slopes, your guide takes you within two hours up to the top. If the trail across the downy oak forest is steep, the result is worth the effort: you get, from the Mourre-Nègre (3,690 ft), a 360 view that allows you to gaze at all the summits of Western Provence – particularly the white limestone ridge of Mont Ventoux – and, if not invisible in the heat haze, the Mediterranean Sea.

This hike offers you the opportunity of learning about the history of the Vaudois (or Waldenses) in the Luberon during the 16th century. Beginning in Mérindol, a village by the Durance river, it takes you up to the stoney plateaus at the bottom of the Petit Luberon mountain. The final part is a descent into a narrow and spectacular canyon very special for its luxuriant vegetation, Gorges de Régalon, where the walls rise 250 feet above the path. You will walk through a breathtaking passage that is only 30 inches wide and see a remarkable cave on your way. A walk from the terraced village of Bonnieux
to Roussillon, on its ochre hill
Full Day

At the foot of the Luberon mountains, Bonnieux, one of the largest villages, rises in tiers on a hillside. From the top, you enjoy panoramic views, seeing as far as Mont Ventoux and the southern Alps and, closer, the famous perched villages of Lacoste, Roussillon and Gordes. After walking down through the narrow medieval streets, you roam the countryside plains dotted with vineyards, orchards, truffle oak plantations and woods. You marvel at this mosaic of a landscape for an hour and a half and then reach sweet Pont Julien, a 2,000-year old Roman stone arch bridge over the Calavon river. Before the quaint village of  Roussillon comes out, the trail on which your guide takes you snakes its way accross wooded hills. To top it off, a dramatic walk on a pathway starting in the heart of the village allows you to discover the wonderful red colored cliffs of the former ochre quarries.

Visit of ochre museum (Okhra) outside Roussillon not included.