the Alpilles: the essence of Provence

Around the spur castle of Les Baux
Half-day

Here is one of our many hikes that reach places of historical interest as well as natural beauty : near Avignon and Arles, you can appreciate a gentle nature walk all around the rock spur of Les Baux de Provence. This spectacular site is one of France’s most famous hilltop village, with the numerous small roof tiles of its stone houses towered by the remnants of its medieval castle, symbol of lords among the most powerful of those times. During this circular stroll, you easily reach two different viewpoints, one from the north of the site, another one from the east,  enjoying breathless panoramas.

In the footsteps of van Gogh from St. Rémy
Half-day

During his five years in France, Vincent van Gogh spent one year in the Saint-Paul de Mausole asylum in St. Remy de Provence, that lies only 12.5 miles from Avignon. This beautiful walk begins in the old town and gets its name from the fact that it takes you to many of the places where the Dutch painter set up his easel ; he painted here more than 70 works, transfixed by the luminous nature sceneries. Your local guide takes you to the outdoors through plains where vineyards and olive groves carpet the landscape, before walking amidst a vegetation and surrounded by an avifauna both typical of Mediterranean nature. As you climb up to the Alpilles crest, in the middle of a pine grove, you can soon enjoy outstanding 360-degree views. This hike could also have been called the Rocher des Deux Trous (Rock with two holes), due to a rock formation at the base of which two big circular holes, invisible for long, suddenly appear as you are getting closer. Before the end of this nature walk, you pass near the site of Glanum, Greco-Roman remains of a settlement that developed 2,200 years ago. One of the loveliest day trips from Avignon !

During most of this scenic walk, starting 2 miles south of St. Remy, from a small pass on the road that crosses the Alpilles range, you keep all along the ridge with your local guide, enjoying vistas in all directions. Suddenly, on the horizon, as you emerge from a thicket of pines, appears before you, among crags, the rock of Les Baux de Provence : a ruined medieval castle and the numerous small roof tiles of the village’s stone houses. Perched on a bluff facing the Alpilles crest, the citadel, that has been abandoned since the 1630s, had been the symbol of the power and of the independence of the lords of Baux, Princes of Orange, for four centuries, almost until Provence was incorporated into the Kingdom of France in 1482. The castle entrance and the few streets in the village are worthwile. An additional visit to Carrières de Lumières, a son et lumière projected onto the walls of a former quarry at the foot of the village, might be of interest for you. 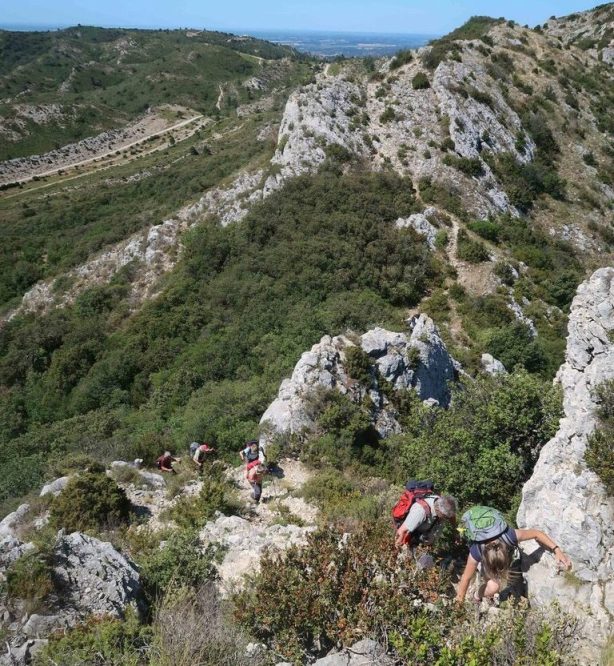 Leaving the medieval streets in St. Remy, you head to an even older quarter : Les Antiques. These are two Roman monuments among the best preserved : the Mausoleum and the Triumphal Arch that used to mark the entrance to the city of Glanum. Walking through pines, on back roads and forest tracks, you gently climb to the Alpilles ridge’s path. Up there, you can admire beautiful nature scenery all around. Following the main ridge, you gradually approach Les Baux de Provence. Built on a rocky spur, the ruined medieval castle suddenly appear. Once the fief of lords among the most powerful in the South of France, this site is something unique. The castle entrance and the few streets in the village are worthwile. An additional visit to Carrières de Lumières, a son et lumière projected onto the walls of a former quarry, at the foot of the village, might be of interest for you.

To start this day hike, your local guide will meet you in the old town of St. Remy de Provence too. After one hour of gentle climbing, you will be allowed to spend the following two hours walking on the Alpilles ridge, up to the top of Plateau de La Caume. On the way, in addition to the vast panorama, you can discover the great variety of Mediterranean nature, in particular flora : not only the famous rosemary, thyme and lavender, but also dozens of other species that blossom early in the year. Back to the plain, and before reaching the pretty village of Eygalières, it is worth going out of the way to visit the Château Romanin. Your local guide can organize a guided tour of the cellar and a tasting of the wines if you are interested. 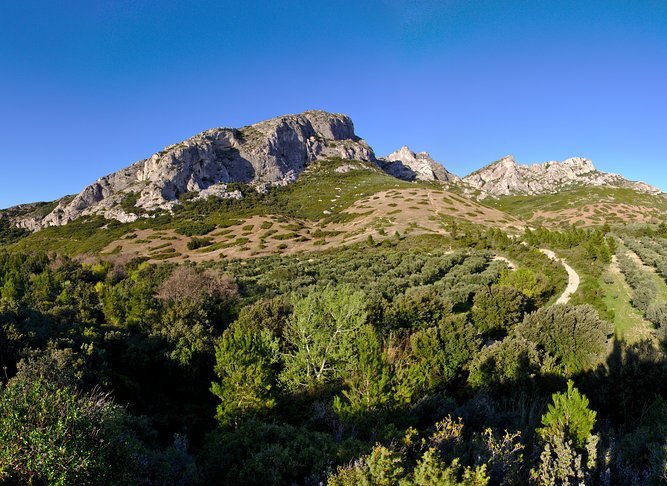